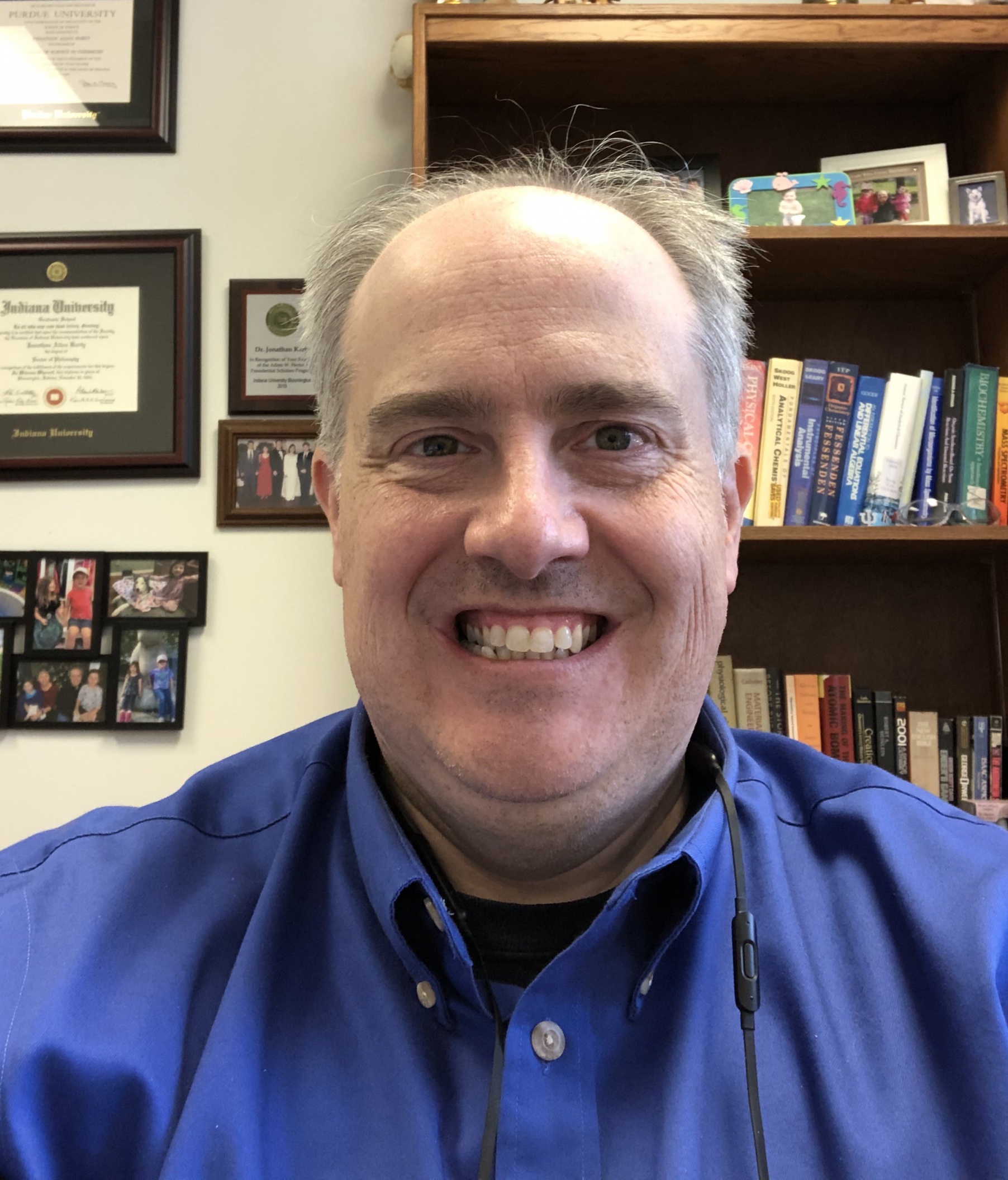 Dr. Karty became a research associate and director of the Mass Spectrometry Facility (MSF) in 2004 and brought a renewed energy to the laboratory. Jonathan and his colleagues advanced IU research projects with three core competencies. First, they provide high quality accurate mass spectrometry analyses for the research faculty in the department. This often requires finding new techniques for generating stable, intact molecular ions of labile species. Second, the MSF teaches graduate students and research fellows the practice of modern mass spectrometry so they may utilize the many mass spectrometers available for 24 hour walk-up use. Third, they assist students and faculty in designing the analytical portions of many research projects. In 2007 Jon was appointed to the rank of Assistant Scientist, promoted to Associate Scientist in 2013, and promoted to Senior Scientist in 2019. From 2010-2012 Dr. Karty also served as the Interim Director for the METACyt Biochemical Analysis Center; this entity was folded into the Laboratory for Biological Mass Spectrometry (LBMS) in 2012 which is now located in Simon Hall. In 2019, Dr. Karty left the MSF to become the Assistant Chair for Administration and Director of Technical Facilities for the Chemistry Department. During his tenure as director (2004-2019) the MSF grew from housing 4 instruments to 9 (including an NSF-funded GC-QTOF), transformed walk-up low-resolution MS into a core service, and greatly expanded its service offerings to include LC-MS-MS, GC-MS based metabolomics, and thermal desorption GC-MS.

Jonathan has maintained a decade-long collaboration with a consortium of scientists studying chromatic acclimation in cyanobacteria. This consortium includes the labs of Professor David Kehoe (IU-Biology), Professor Wendy Schluchter (University of New Orleans), Dr. Frederic Partensky and Dr. Luarence Garczarek at the Roscoff Biological Station of Sorbonne University as well as Dr. Jonathan Trinidad in the LBMS at IU.

Dr. Karty also had the pleasure of collaborating with local businesses in Bloomington and the surrounding area during his tenure as MSF director. These companies include Cardinal Spirits, The Mad Optimist, Quarrymen Coffee, and Knauf Insulation to name a few.