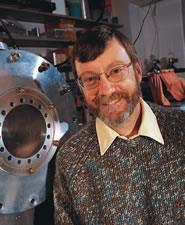 Professor Reilly received his A.B., Chemistry, from Princeton University in 1972. He completed his PhD in Physical Chemistry at the University of California, Berkeley in 1977. He served as a postdoctoral fellow in 1978 at Max-Planck under the tutelage of Gesellschaft Zur Forderung Der Wissenschaften. Professor Reilly has been a member of the Indiana University, Department of Chemistry, faculty since 1979.