Dennis was a cherished member of the Chemistry department for almost sixty years. He had taught 15,000 undergraduate students (regularly teaching the introductory chemistry course for freshmen science majors), published five text books that have been translated into multiple languages and sold over 120,000 copies worldwide, mentored over 40 graduate students in his research group, had approximately 30 undergraduates as co-authors on his publications, and he had been intimately involved with high school chemistry programs around the state. He was teaching J117 up until this past spring break.  To literally thousands of students, faculty and guests, Dennis represented the heart of the Department. 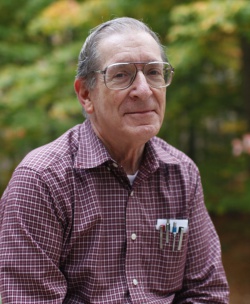 Born in Eagle Rock, CA, in 1937, Peters pursued a degree in Chemistry first at Caltech, receiving a B.S. in 1958. He then attended Harvard, where he obtained a doctorate in 1963. He immediately began his academic career at Indiana University, where he has served since.

Peters was renowned as a chemical educator, having received all the local awards for education available on the Bloomington campus. Included are the Ulysses G. Weatherly Award for Distinguished Teaching (1969), the Herman T. Briscoe Professorship (1975), and the College of Arts and Sciences–Graduate School Award for Distinguished Teaching (1984)—all three distinctions for teaching at the highest level. In April, 1995 and again in April, 2000, Prof. Peters received the Favorite Faculty Award from the Indiana University Chapter of Alpha Lambda Delta. In 1997, 1999, and 2000, he received a Teaching Excellence Recognition Award from the IU Board of Trustees. This award was later replaced with the IU Trustees Teaching Award, which he won in 2003, 2005, 2007, and 2010. In 2017 he received the inaugural David and Cheryl Morley Career Distinguished Teaching Award, which recognizes a lifetime of contributions to the academic mission of the Chemistry Department at IU.

Peters also won a host of national awards, including the Chemical Manufacturers Association National Catalyst Award in 1988 and the ACS Analytical Chemistry Division Award for Excellence in Teaching in 1990. He was the 2001 recipient of the James Flack Norris Award, presented by the Northeastern Section of the ACS, for Outstanding Achievement in the Teaching of Chemistry and the 2002 winner of the Henry B. Linford Award, presented by The Electrochemical Society, for Distinguished Teaching. Most recently, he was presented the 2020 Roland F. Hirsch Award for Distinguished Service in the Advancement of Analytical Chemistry by ACS Division of Analytical Chemistry.

Peters has had a profound impact on education at Indiana University, and was universally liked and admired by students, faculty, and non-academic staff alike. He taught more than 15,000 students in a classroom setting since 1962. In the laboratory, 43 graduate students, 45 undergraduates, and 31 high school students have studied with him; indeed, many of his publications list undergraduates as co-authors.

Since 1982, Prof. Peters has directed the chemistry component of the Advance College Project, a program in which Indiana University cooperates with high schools throughout Indiana to offer university-level courses in general chemistry. These courses are taught by superior high school teachers to qualified high school juniors and seniors, who earn college credit. Thousands of high school chemistry students have benefited from this program. In addition, Prof. Peters served for more than 26 years as a lecturer and research mentor in the IU NSF-supported summer science institute for high school students.

In 1986, Peters invited 26 high school chemistry teachers to Indiana University to discuss problems centering on the curricular content of high school chemistry courses, the operation of laboratory courses, the selection and procurement of textbooks and other materials, and laboratory safety. One year later, he organized a meeting in Indianapolis attended by more than 200 high school and college chemistry teachers from Indiana. On the basis of that meeting, Prof. Peters, with assistance from three other educators, founded the Indiana Alliance of Chemistry Teachers (I–ACT).

For many years, during the IU Chemistry Department celebration of National Chemistry Week, Prof. Peters conducted an extremely popular program of demonstrations, called the “Magic of Chemistry,” attended by several hundred elementary, middle, and high school students and their parents. On other occasions, he performed this program for groups such as the Boy Scouts and the Indiana Science Olympiad.

Peters was the principal author and driving force behind the highly regarded text “Chemical Separations and Measurements: Theory and Practice of Analytical Chemistry”, one of his five textbooks that in total have sold more than 120,000 copies.

Research pursued by Peters and his 119 graduated research-group members centered on organic electrochemistry, most recently involving metal-salen complexes. These studies resulted in more than 215 publications, which were recognized by The Electrochemical Society in 2012 with the Manuel M. Baizer Award in Organic Electrochemistry.

Seemingly mild-mannered and physically unimposing, Peters possessed a booming voice and a lecturing style that could not fail to win students over. He was also surprisingly competitive, especially on the racquetball court, where his aggressive style usually resulted in victory. He was generous with his time and knowledge and assisted many of his junior colleagues in the most effective style of writing lectures, journal articles, and research grant proposals. Each year, he voluntarily prepared and presented a multi-lecture short course on effective scientific writing, a series that was routinely attended by both faculty and students. Generous also with his personal resources, he was named for the 2019 Old Crescent Award from IU, intended to celebrate individuals whose exceptional philanthropy creates a lasting impact, empowering students and faculty of today and tomorrow in equal measure. He was truly loved and admired, and will be missed by so many.

Prof. Peters is survived by his nephew Ruben Portugues, living in Germany, and by his niece Iliana Portugues who lives in the UK. Both became scientists, in no small measure, due to the interesting stories and demonstrations from their uncle, his kindness and genuineness, his passion for research and teaching and their summer visits to Bloomington and IU Chemistry.