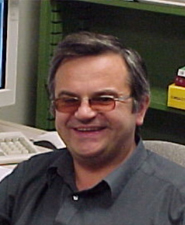 Yaroslav Losovyj received his M.S. degree in Radio-Physics and Electronics with honors and his Ph.D. in Physics and Mathematics from the L'viv State University, Ukraine. Prior to joining the Chemistry Department at Indiana University in 2012, he was a research scientist, senior lecturer and assistant professor at the Technical University of L'viv and National University of L'viv, Ukraine, and since 2001, was a staff scientist at Louisiana State University's synchrotron housed at the Center for Advanced Microstructures and Devices. Since 2002, he has maintained an adjunct research professor position at the University of Nebraska (Lincoln).

Dr. Losovyj's research focuses on the application of surface science techniques (including synchrotron-based angle resolved photoemission spectroscopy) to studies of metal-metal films, metal-semiconductor nanostructures, and epitaxial films. He also studies the electronic and atomic structure of materials including nanoclusters as well as phase transitions in adsorbed layers and metal-insulator transitions. His interest extends also to transition metal hydride chemistry, nanomaterials (including colloidal graphene/graphitic quantum dots and various bimetallic nanoparticles), and magnetically recoverable nanocatalysts through collaboration with researchers at Indiana University. He is manager of the XPS Laboratory, which is part of the Nanoscale Characterization Facility (NCF) at Indiana University.