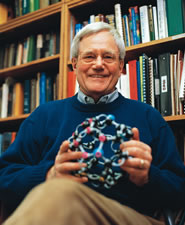 Most organic materials are electrical insulators. In recent years, however, organic radical cation and anion salts have been prepared with electrical conductivities more than 20 orders of magnitude greater than the poorest insulators. Some rival the conductivities of copper, silver, and gold. In 1981, the first ambient pressure organic superconductor was discovered, although it did not attain a superconducting state until 1.2 K. Since then, more than 100 organic superconductors have been reported, and the maximum superconducting transition temperature (Tc) has risen by two orders of magnitude. Salts of buckminsterfullerene (C60) have the highest Tc's. Bulk superconductivity has been observed in Cs3C60 at 40 K. A mixture of C60 and bromoform has yielded the highest Tc to date, 117 K. Most important, there are good reasons to believe that organic superconductors represent one of the more promising areas to search for new high-temperature superconductors.

Our research focuses on the design, synthesis, and characterization of new organic superconductors. Major characterization procedures include electron spin resonance spectroscopy, electrical conductivity, X-ray diffraction, and a variety of magnetic measurements. Molecular orbital and molecular mechanics calculations are employed in designing new conducting systems. Various theories of superconductivity also play a role. Once a new molecular precursor is conceived, it must be synthesized. Considerable effort goes into this aspect of our research. Conducting radical-ion crystals are grown in 72 electrochemical cells that are thermostated and vibrationally isolated. In order to more completely understand the physics of the conductors that we prepare, we collaborate with about 30 research groups around the world. The most unusual collaborative experiment that we have carried out is to measure the electrical resistance of an organic superconductor at magnetic fields up to 150 Tesla that were generated by blowing the sample up with high explosives (flux compression).