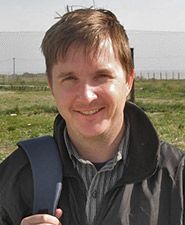 Jeremy Smith received his B.Sc. (Hons) from the University of the Witwatersrand, Johannesburg, South Africa. He completed his Ph.D. in 1996 at the same institution, working with Neil J. Coville on the quantification of steric effects in organometallic chemistry. He subsequently spent time in the laboratories of Russell P. Hughes (Dartmouth College), where he worked on the activation of C-F bonds by organometallic complexes, and Patrick L. Holland (University of Rochester), where he investigated low coordinate iron complexes as models for nitrogenase. From 2003-2013, Prof. Smith was a faculty member in the Department of Chemistry and Biochemistry at New Mexico State University. He was named a Camille Dreyfus Teacher-Scholar in 2009.

Professor Smith's research involves the investigation of transition metal complexes as applied to chemical transformations. This work involves the synthesis, characterization and reactivity of metal-ligand multiple bonds, the development of new scaffolds for spin-state tuning and photomagnetism in low coordination environments and the design of complexes for energy-relevant catalysis.