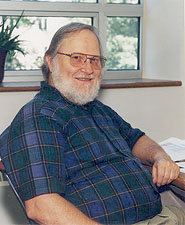 Professor Crandall received his B.S. (Honors) from the University of California (Berkeley) in 1960 and his Ph.D. from Cornell University in 1963 where he was a National Institutes of Health (NIH) Predoctoral Fellow under the direction of Professor Jerrold Meinwald. He subsequently spent a year at Stanford University as an NIH Postdoctoral Fellow in the laboratories of Professor W. S. Johnson. He joined the faculty at Indiana University in 1964 and was promoted to full professor in 1973. He has served as Associate Chair of the Department since 1997.