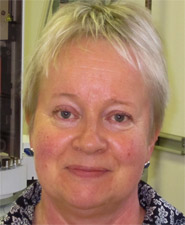 Helena A. Soini received her M.S. degree in structural organic chemistry at the University of Oulu, Finland, in 1982. She worked from 1982 to 1991 as a Research Scientist and Laboratory Manager in a bioanalytical laboratory in Orion Pharmaceutica, Finland. She continued her studies and received her Ph.D. degree in 1994 in analytical chemistry at Helsinki University, Helsinki, Finland.

She worked as a Ph.D Scientist and Senior Scientist in the Procter&Gamble pharmaceutical and food technology research laboratories in 1994-2001. From 2001, she has been working as an Associate Scientist and a Senior Scientist (promoted in 2008) in the IU Institute for Pheromone Research. Helena Soini collaborates with biologists, behavioral scientists and medical researchers at IU, and other universities in USA and overseas.

Since 1998, she has taught a graduate level course "Modern Carbohydrate Analysis Methods" in the Department of Chemistry, Analytical Chemistry Division, Helsinki University, Helsinki, Finland where she holds a position of Adjunct Associate Professor .

Her research interests are in separation science (chromatography and capillary electrophoresis) and mass spectrometry with biomedical applications. Special interest areas are chiral separations, protein and carbohydrate analysis, olfaction and chemical signaling studies. She has authored and co-authored 50 peer-reviewed papers and holds two US patents.