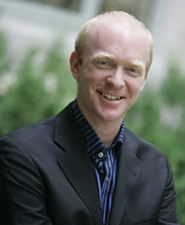 Professor Flood received his B.Sc. With 1st Class Honors in 1996 and his Ph.D. in 2001 from the University of Otago with Professor Keith C. Gordon. He was a Postdoctoral Scholar at the University of California, Los Angeles, from 2002 to 2005 with Sir Fraser Stoddart.

To date, he has authored over 100 journal articles, 5 book chapters and has made more than 100 invited and contributed presentations at national and international conferences in the field of supramolecular chemistry. He has served on the organizing committee for three international conferences including the upcoming 2013 International Symposium on Macrocyclic and Supramolecular Chemistry (ISMSC) and will Co-chair the 2017 GRC on Artificial Molecular Switches and Motors. He received Indiana University Trustees Teaching Awards in 2008 and 2010, an NSF CAREER Award in 2009, was a 2010 Camille Dreyfus Teacher-Scholar, the Award for Excellence in Physical Organic Chemistry by Wiley and the inaugural Cram Lehn Pedersen Award in Supramolecular Chemistry for 2011.